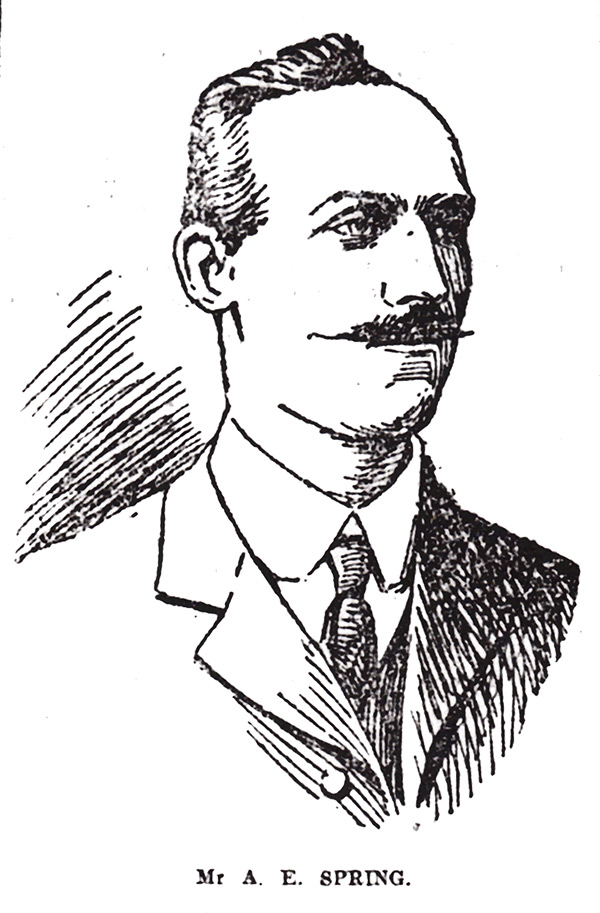 Alf Spring’s role in the formation –and subsequent progress- of Hull City was as a quietly influential official whose position as secretary of the East Riding F.A. ensured legitimacy and support for the newly- founded club.

He was the subject of several local newspaper profiles and interviews where his football background was chronicled, even if his administrative role with the local FA meant that he was rarely embroiled in headline news. These articles combine to give an image of a faithful and loyal worker in the cause of the formal establishment of football in East Yorkshire over many decades, and his involvement with Hull City was only a part of this.

Spring worked as a salesman for the well-established Hull ironmongery business King and Co., whose premises were at South Churchside in Hull’s Market Place. This company sold wholesale and retail items in iron and steel, to builders for structural work as well as smaller items for domestic furnishing (such as stoves and grates).

His address in June 1904 was 61 Blenheim Street – then a newly-built residential road off Princes Avenue, on the edge of the city. Some 15 doors away lived fellow-founder Mark Andrews (‘certified teacher’). Although the two would have been aware of each other (Andrews was one of the best-known local footballers and Spring was a prominent local football referee and administrator), there is nothing to suggest that this proximity was instrumental in the formation of the club, especially as Andrews frequently changed addresses in the early years of the last century .

This 1908 profile of Spring comes from a local weekly magazine (the Hull Graphic) and is uncredited.

MEN WHO HAVE MADE THE EAST RIDING FOOTBALL ASSOCIATION

To no one in this city does soccer owe so much as the subject of our sketch this week. Like Mr. Bielby, he has been associated with the E.R.F.A. since its inception, and in every move forward the game has taken Mr. Spring has been conspicuous in it. He has held the positions of committee-man, vice-chairman, chairman, president and secretary, under what is now the E.R.F.A., all of which office he filled to the entire satisfaction of himself and all concerned, and the present firm position of soccer in Hull is due in no small measure to the hard work put in by Mr. Spring in years gone by. He has the advantage of a practical knowledge of the game, having played for one of the first formed soccer clubs in Hull. I think I am correct in saying that full back and forward were his favourite positions on the field.

The season of 1892-1893 saw the subject of our sketch elected secretary of the St. Paul’s club, a position he held most successfully until the club ceased to exist nine years later. It is one thing to take office and be successful when a thing is in its infancy and consequently small, and another altogether to grow with it and to be as successful when the same thing has assumed enormous proportions and grown almost past recognition; men of limited intellect would naturally be left behind. Not so men of Mr. Spring’s type, the greater the responsibility the more these men shine. No matter how big a demand circumstances many make upon brains, Mr. Spring can supply it, and it is now, when the E.R.F.A. comprises almost 200 clubs and is directly affiliated with the football association, when we have a successful Second League club in Hull, with unlimited prospects for more important developments still.

Mr. Spring stands out as one of the men who is capable of leading on to further success. When the E.R.F.A. were granted direct representation, he was appointed as the first representative, and is now a member of the Divisional Committee of the Football Association, a committee which deals with the Cup Competitions of the F.A., and a member of the Reinstatement Committee, Midland Section, and locally he is a life member of the E.R.F.A., secretary of the East Riding Cup Committee, a Hull City director, and various other offices, all of which mean time and energy. I had the privilege of a few minutes’ chat with him recently and ventured to ask him his opinion of the Amateur split and he candidly expressed the opinion that it would fizzle out. The Football Association have pledged themselves to assist loyal clubs in affected parts. Mr. Spring also expressed disappointment that more clubs in this district had not entered for the English Cup and the Amateur Cup. Clubs should give this their attention next year. I may add Mr. Spring is working hard with the object of securing an International match for Hull next season with the Netherlands Team which is visiting this country.

It is as an organiser that Mr. Spring is seen to best advantage, and the splendid scheme of League re-construction just completed is a striking tribute to his organising abilities. As a personality Mr. Spring is well-liked by both officials and players, genial, even tempered, tactful and courteous, one of nature’s gentlemen. He is not a forceful speaker of Mr. Bielby’s type, but talks sound common sense and speaks with evident sincerity- sophistry is, I believe, unknown to him. He is a man all lovers of soccer admire and respect, and the Graphic wishes him every success, and hopes he will long continue to honour local football by his presence and assistance.

Given his early involvement as player, official and prominent local FA president, it would be impossible for Spring to be unfamiliar to most other founders, especially those actively involved in playing the game.

Numerous examples of this contact could be found in the newspapers of the day. For example, on the 24th February 1899 the Eastern Morning News gives details of the St Paul’s team to face Brunswick Wesleyans on their home pitch on Welbeck Street, Princes Avenue, with Alf Spring on the left wing and fellow founder Ben Saunders Frost at centre half (Frost had links to the St Pauls in the late 1890s).

Then in June 1902, at an E.R.FA. meeting, another Hull City founder, Percy Wrightson, asks Spring if there exists an examination through which referees could be put, as at Withernsea he had experienced a very unsatisfactory level of officiating, with some arriving equipped ‘with a pocket-full of home-made rules’ .

A few months later that same year, Spring is now the honorary treasurer and president of the East Riding of Yorkshire F.A., and is instrumental in organising the “Hull Times” Charity Cup Competition. His efforts are recognised by his colleagues at the annual committee meeting, among those present, according to reports, were Jack Bielby and Jack Haller (vice presidents) and William Hay (of the original pre 1904 Hull City).

At the end of that season, the original Hull City win the trophy at the Boulevard against Grimsby St John’s on April 28 amid great enthusiasm. The victorious Hull City team, which is now seen as the best local side by common consent, is recognised as such at the Grosvenor Hotel on May 14th at the E.R.F.A. annual dinner. The dominant Hull City side are presented with trophies and accompanying medals, and their captain Mark Andrews responded to the toast “Winners of Cups and Medals” with a short speech, in which he remarked that with the First League cup, he had received three on behalf of the club.

Clearly a nucleus of original founders, with varied backgrounds and ages, were aware of each others’ roles and identities.

Some four years later in November 1912, the Hull Daily Mail published a series of articles on local football personalities by the journalist ‘Chiron’,recounting many of the facts and historical details as the Hull Graphic feature, although it concluded with a lavish personal endorsement of his character and abilities:

“Mr Spring’s personality is too well known for me to enlarge upon it. I can truthfully say no man has worked harder to foster “Soccer” football than he has. No man is today more welcomed at meetings than he is, and no man is more genuinely respected amongst all classes than our friend “Alf” Spring. May he long be spared to assist in the deliberations of our County Association, and its parent body, the F.A.”

Some 35 years later, in the 1947/48 edition of the 164 page Hull Daily Mail Football Annual, a short one page article appeared paying tribute to his longevity and service to local football. Titled ‘SOCCER STALWART- Mr. A.E. Spring’s many honours’ , it summarised Spring’s contribution to the local game and updated it by adding:.

An illuminated address containing an appreciation of his services during a period of 40 consecutive years was presented to him in 1946 by the Earl of Athlone, president of the FA. 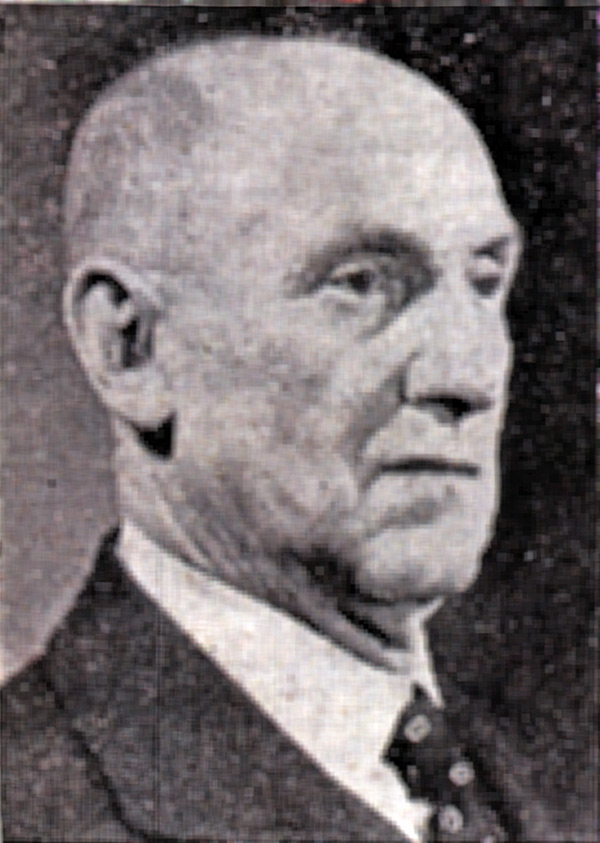 Significantly, and perhaps surprisingly, the 1947 profile makes no mention of his role as a founder of Hull City. Given his dedication to local grass roots football and his active involvement with it over many decades, Spring’s participation in the establishment of a local professional club could be seen as merely a small part of a much bigger personal picture.