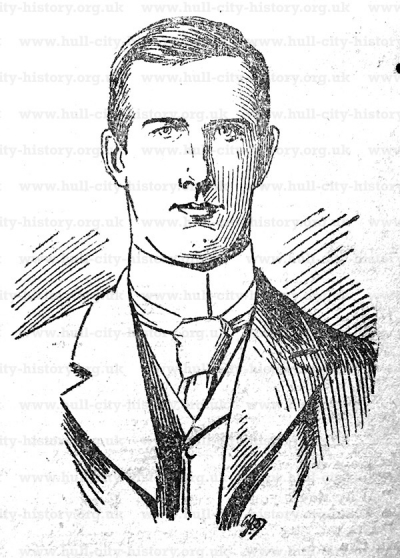 Ben Saunders Frost junior was born into a family who had established a thriving city-centre business as fruiterers and florists, firstly on Midland Street and then on Waterworks Street in the city centre.

Ben himself was educated at Hull Grammar school and represented it firstly at rugby in 1892 then football. The Hay brothers (Willie and Henry) also played for the school’s football team. At this time Hull Grammar School was situated on Leicester Street off Wellington Lane in the Beverley Road area, a part of the city where a cluster of young men with similar sporting interests were growing up.

The school itself had only opened in 1890 and was seen as an important and positive educational resource for the populous streets north of the centre of town, which included Beverley Road and Newland Avenue. These busy roads both had a vast number of smaller streets, terraces and avenues leading off them. 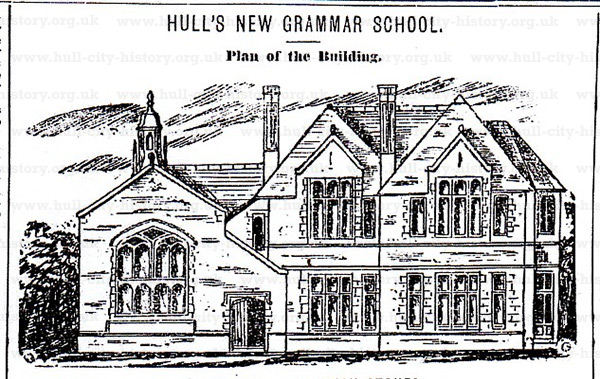 A brief snippet, provided by an old local player and printed in a Hull City programme in the 1946/47 season, provides a valuable contemporary anecdote about some of the people involved in the founding of the club. An unsolicited point of view, but it nevertheless helps to form a greater understanding of the people and places of the era in which the club was born. This detail does not form part of any known version of the origins of the club 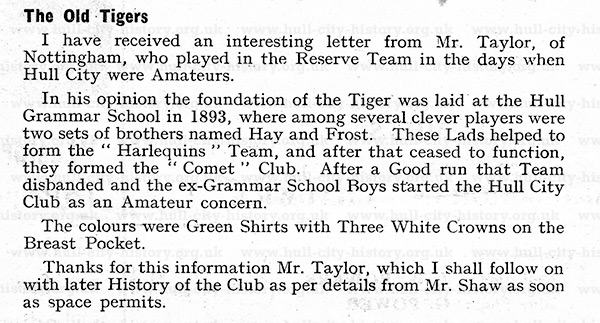 The Hay brothers (Willie and Henry) were the sons of club co-founder William Hay. The brothers played in all of the antecedent Hull teams associated with the grouping of young players from the Beverley Road area. They were both useful attacking players and young Willie even played for Hull City in the club’s second game against Everton ‘A’ in the 1904/5 season, among the professionals who had been recruited to the cause. Older brother Henry would eventually be voted onto the board of directors in the 1920s long after his friends had ended their formal connections to the club.

Liverpool-born Ben Saunders Frost senior came to live and work in Hull in the middle of the nineteenth century with his Margate-born wife Julia. The couple eventually settled in the Beverley Road area and Frost senior worked in the fruit and vegetable trade. The pair had several children with Ben junior being born in 1877. Four years later Ernest Laurence Frost was born, followed the next year by Walter James Frost. The 1891 census shows the Frost Family living at 128 Beverley Road, a short distance from Hull Grammar School in Leicester Street attended by Ben, Ernest, Walter and the Hay brothers. A fourth Frost brother Bertie Harold (born 1892) would later follow in their footsteps.

Ben junior excelled at sports, representing his school at rugby in the 1891/3 season when he would have been 14 years old. The following season he played for the Rovers A rugby team. He also then switched codes and turned out for All Saints at football in the 1894/5 season (All Saints Street ran parallel to Leicester Street . Playing as a commanding full-back, Frost established himself as a forceful defender and willing to lead. He then transferred to St Paul’s, serving them from 1896 to 1899, before briefly joining Harlequins. In 1897 Frost had risen to prominence on the local football scene to be a reserve for a Hull league team who played their Grimsby counterparts at Dairycoates. (‘The Hull men, who will dress at the Locomotive Inn, are to play in white.’)

Over the next few years he would play cricket for Rovers in 1900 (alongside Lawrence Traynor), and then turned out for Beverley Church Institute (with Mark Andrews) in the 1900/1901 season. Clearly he was a versatile and capable sportsman, happy to lend his talents to several local outfits. Brother Ernest meanwhile was playing for Comet in the 1899/00 season. Ben made one appearance for the original Hull City in the 1902/03 season, when he was playing for Hessle AFC. When that club folded in the summer of 1903, Frost brought the core of the team to come and play alongside him at Hessle for the 1903/04 season before the successful re-founding of Hull City in June 1904. Frost had volunteered for the Imperial Yeomanry at the time of the Boer War, and this activity impacted on his availability for sporting pursuits.

The Frost family had connections in the Hessle area and these may have meant the focus for family life was no longer Beverley Road and the city centre fruit and flowers business. By the 1903/4 season he was firmly established as a leading player for Hessle and deemed sufficiently noteworthy to merit a short profile in the weekly Hull. Sports Express published each Saturday. The article noted that:-

Ben S. Frost is the popular captain of the Hessle Association F.C., and one of the three brothers who figure in the half back line. Aged 26, standing 5ft 9in, and scaling 11st 10lb, he has all the desirable physical characteristics that help to constitute a good footballer. With them he joins the mental faculties of cool discernment and quick decision. He is fairly rapid, can play a good individual game, and yet feed his forwards well without being showy. His first football experience was gained in the Rugby game with the Hull Grammar School team, and in season 1891-2 he joined the old Albany Soccer team, which afterwards became known as the Hull Town Club. In 1895-6 he figured in the All Saints’ ranks, transferring his services to the Hull St. Paul’s A.F.C. the following season, and remaining with that club until 1899. That year found him doing excellent service in the ranks of the Beverley Church Institute team until the club disbanded in 1901. After that he took part in sterner warfare in the South African campaign, and whilst in Cape Colony he participated in several football games in Cape Town and district. Returning home, he joined his present club in 1902-3, and is undoubtedly the cleverest player in his position as centre half in the district. Of a very even-tempered disposition , he is highly esteemed by his companions, and is regarded by his rivals as a most genial opponent, as well as one to be feared.

What conversations took place with Messrs Hay, Levitt, Andrews and Crompton at the conclusion of the 1903/4 season remain undocumented, but clearly an ambition to run a superior local team still fired the thoughts of the group and it appears some kind of plan or proposal was made at the ERFA meeting at the Manchester Hotel on the 28th June 1904, and a joint scheme was unveiled.

Two months later, in a warm up match at the Boulevard a few days before the new club’s opening game against Notts County, Ben Saunders Frost plays as a half-back for a District XI, fellow founder Mark Andrews plays at full back, and Willie Hay in the forwards, as Hull City coast to a 5-0 victory against the District team in front of ‘well over 1,000’ spectators. All three would get their chance to play for Hull City in the next few months, but would find the difference in quality between local amateur football and the sport as played by seasoned professionals, to be a daunting one. Frost was still associated with Hessle AFC in the 1904/5 season.

He appeared for Hull City against Middlesbrough Reserves in October 1904 with a few other young fringe players . Playing in the middle of the defence, he failed to impress the watching ‘Athleo’ of the Hull Daily Mail, who wrote:

‘Ben Frost, another local amateur, was weak at centre-half, and could not apparently stand the racket of the game as played by professionals.’

(His friend, co –founder and team- mate Mark Andrews received a similarly harsh verdict from the chief sports reporter of the local paper, who judged that:

‘Andrews was not good enough on this occasion, and considerable extra work was thrown upon Jones and Raisbeck, who had to repeatedly cover his mistakes.’

Soon both Andrews and Frost would turn out at Goole, their playing story for Hull City at an end. How much impact their experience against Middlesbrough Reserves impacted their thinking is unknown, and the pair both had steady jobs with prospects outside football which may have shaped their thoughts as regards their footballing activities. The death of Frost’s father (the head of the family business) in 1907 would also have meant major changes in the lives of the brothers.

The same year, Frost’s name appears at the Humber Swimming Gala. His brother Ernest is also a champion swimmer, and together with youngest brother Walter, the three become prominent members of the local swimming and water polo scene. 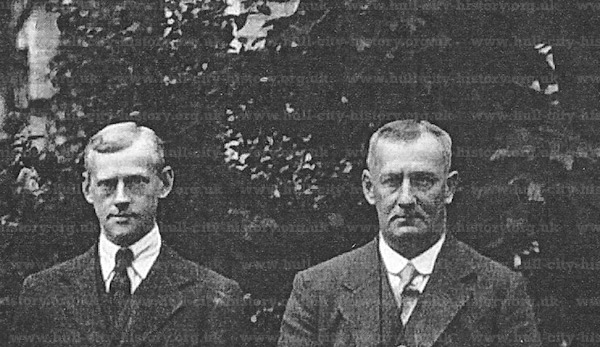 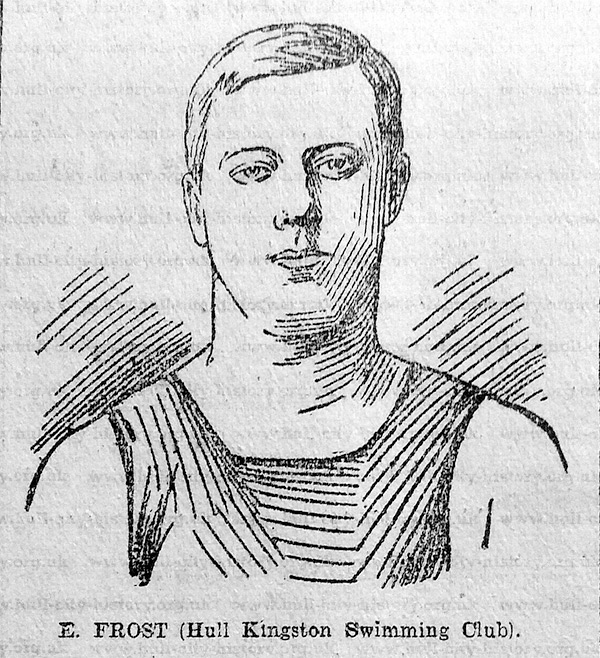 Walter and Ben Frost pictured in a family photo from the 1920s, and a drawing of Ernest Frost from an article on local swimming

Walter, however, plays for Hull City in the 2-0 defeat at Barnsley in April 1906 as the club suffered a spate of injuries in a hectic Easter spell of games. His name also appears as a player for the ‘Cubs’ – the jocular name given to the Hull City second team. 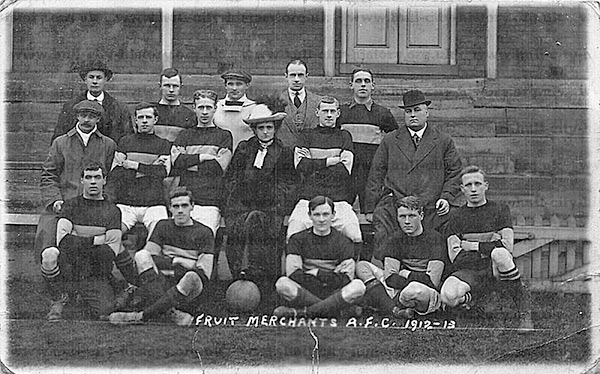 A 1912 postcard of the Hull Fruit Merchants XI with Walter Frost on middle-row , second from right, in front of the Hull Cricket Club pavilion.

Ernest Laurence, unlike his brothers who worked in the family fruit and vegetable business, was a draughtsman by trade and was vice captain of the original Comet 2nd team (Fred Levitt was vice captain of the 1st team) which was formed July 1899. The connections between the Frost boys and the various sporting teams in which other original founders played were numerous. Ben Frost for example played cricket for the same Rovers cricket club as Mark Andrews, and played alongside him for the Beverley Church Institute in 1900. They would subsequently play for Hessle, Hull City and Goole together. (The duo even formed a billiards partnership in February 1906 as the “Mail” club playing against St. Andrews Recreation Club!)

The Frosts would maintain their link to Hull City, albeit remotely, when they advertised in the Hull City match programme and also the 1927 Elizabethan Fayre brochure – Henry Hay was then a serving director of the club, and his links to the family probably assisted in their decision to help the cause. Henry Hay also represented the club at the funeral of Walter ‘Wally’ Frost a few months later. Walter had taken over the running of the family business in 1907 following the death of Ben Saunders Frost senior, transferring the business from the corner of Midland Street ( opposite the station gates) to Waterworks Street in the city centre.

Ben Frost would then be more easily identified as a prominent member of the local fruit and vegetable trading community, for example travelling to Belgium to further business links in 1907, and as a keen swimmer for the Humber Swimming Club, who was involved in water polo and other club events. In the 1920s he remained active by playing both golf and bowls.

As the oldest of three footballing brothers and a co-founder of Hull City, Ben Saunders Frost junior had an integral role in the complex web of acquaintances and sporting activity in the Hull of the late 1800s and early 20th century. The location of his school and house in the Beverley Road district enabled him to form friendships with like-minded young men interested in playing football. This network of players and their teams helped forge the best amateur team in the city and their aspirations came to the attention of older members of the local footballing fraternity. Never one for the paperwork and officialdom related to running sports teams, he preferred playing and participating in many sports and for a variety of teams. He brought a sturdy resolve and competitiveness, whether helping to run a fruit and flowers business or setting up a professional football club with friends. 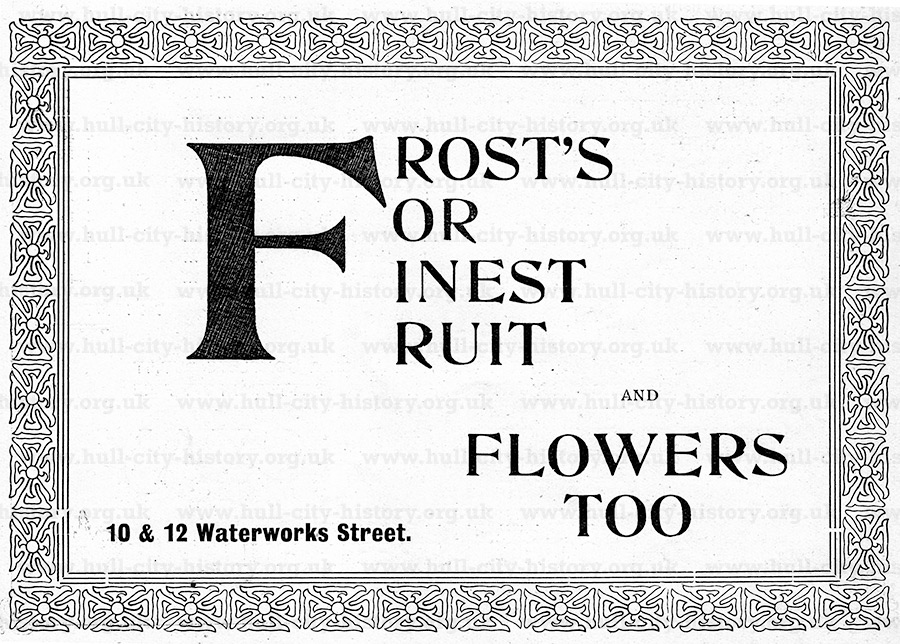 (Thanks to Susan Frost for her assistance with this article)