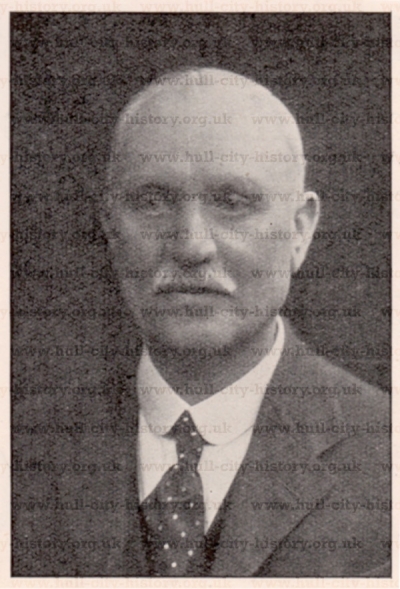 The background to James Barraclough’s involvement in the founding of Hull City is not readily apparent from the known facts of his life and work.

Already in his 40s at the turn of the last century, he was a prosperous Lincolnshire sloop and keel owner based in Barton who had offices in Hull. He had no known participation in the playing of football, but had commercial links with some other founders, most notably chairman William Gilyott whose own business activities dovetailed with those of Barraclough.

Being neither associated with the younger Bull Lane contingent nor the older founders with their ERFA affiliations, he belonged to a third category: that of wealthy local (ish) businessmen keen to use their money & position to back a new sporting venture in the city. A love of sport, an eye for a coming leisure pursuit, a chance for social advancement, the excitement of a new high-profile venture, joining his associate William Gilyott…many are the possible motives for Barraclough’s decision to invest time and money in the newly-formed Hull City.

Born in 1863, ‘Big Jim’ Barraclough was the oldest of ten children who grew up in Barton, a small town on the south bank of the Humber. Several branches of the Barraclough family lived locally and most were involved in the transporting of goods by water to and from the ports of Humber estuary. Typical jobs for the lighters, sloops and barges would be transporting imported goods inland via the canal network and rivers, and returning with loads of coal from as far away as Sheffield. Barraclough himself slowly but steadily built up his business. As the biggest port on the estuary, Hull would be the hub of activity for the moving of goods by water. Recognising this, he based himself in Imperial Chambers, Bowlalley Lane in the city’s Old Town business district, and became part of the local community of wharfingers, warehouse owners and coal exporters. He maintained his home in Barton where he was a prominent figure in local affairs and never resided in Hull. (Apart from Gilyott, coal exporter Percy Wrightson was also involved in port trade. Fellow- founders Thomas Shaw and Ben Crompton worked on Princes Dockside for a coal and granite merchant.) 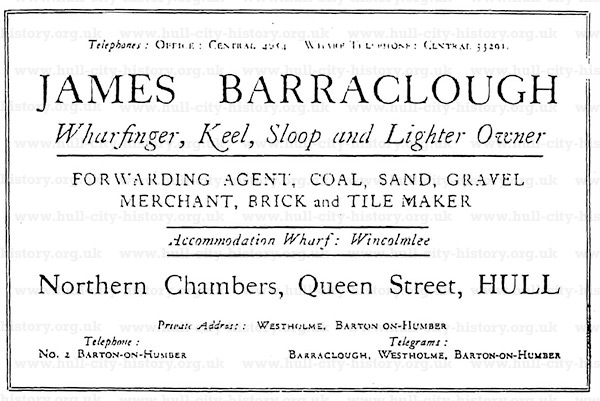 Barraclough would be a director of Hull City from 1904 to 1925 when he resigned due to ill-health. He was then elected President and occupied that role until his death at the age of 70 in 1933. Undoubtedly his wealth ensured he was an important director, but his longevity demonstrates a long-term commitment and tenacity that ensured the club could depend on him when a steady hand and deep pockets were needed, such as for the duration of the First World War when club income was minimal. Never a high profile personality in the Press or public consciousness, he nevertheless completed one of the longest service stints of all the men who founded the club, and his son John Will Barraclough followed in his father’s footsteps. Barraclough junior became elected chairman of the Humber Coal Exporters’ Association and a well-known figure in port trade activities, and when Dr. C Durham Pullan resigned as chairman of the club in 1930, he took over the reins with his father as President.

At a dinner given in October 1926 at the Grosvenor Hull to honour the recently-retired directors Jack Bielby and James Barraclough, various directors past and present paid tribute to the pair, their long service and the attributes that they had put at the club’s disposition. Extracts from the various speeches made that evening testify to the contribution made by Barraclough.

Referring to the First World War and the difficulties the club faced to keep going, fellow founder Alf Spring spoke of the task he faced with Jack Bielby “It was a hard struggle but as regards finance there was always one gentleman ready to come forward when the club was hard pushed. That was Mr. James Barraclough and they often had to go to him to help them to pay their way.

His influence was also of great help at the bank when they wanted further assistance to carry on. Mr Barraclough and Mr Bielby never got down-hearted during the black days of the war.” 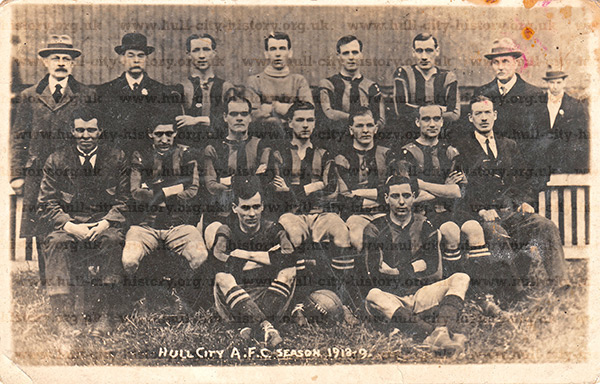 Photo taken before the game against Coventry City on 25th January 1919 at the Anlaby Road ground. ’Big Jim’ Barraclough is far right back row, Jack Bielby is second left in bowler hat.

The pair were presented with inscribed gold medals in recognition of their 22 years' service and given ‘the freedom of the Hull City Football Club and ground privileges for all time’.

Barraclough responded paying tribute to the deceased members of the original company and stating that it was one of the greatest pleasures of his life to be a member of the board. He also shared an insight into his daily ferry commute from New Holland and back , revealing how his fellow passengers offered their opinions on what the team needed to improve its fortunes on the pitch, but opined that the club more than anything else needed more spectators coming through the turnstiles. He was not the first or the last Hull City director to express this thought in public, but his own example of pumping money into the club in difficult times marks him as one who led by example, doing so discreetly, without fuss and not seeking a return.

Whatever his motives were for helping to found Hull City, he came to represent continuity and solidity throughout the early seasons, and his commitment never wavered.