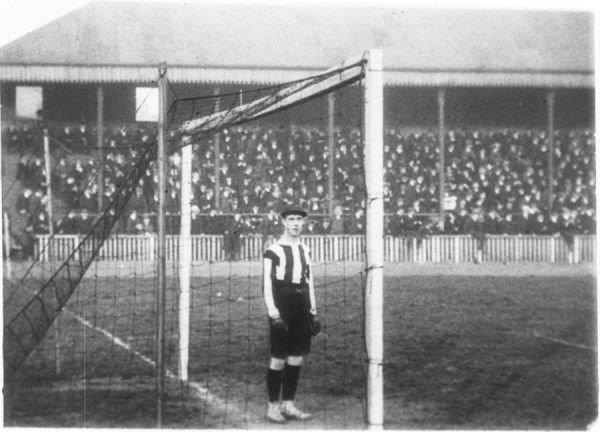 The discovery of hundreds of films dating from the early twentieth century in the cellar of a Blackburn shop provided historians with a rich variety of footage of everyday life. Among the reels were several films featuring football matches and local events from towns and cities of the north of England and beyond.

Many of these were titled, but some remained unidentified or merely numbered. Two reels identified as featuring the same Hull City match fall into this latter category. The occasion, date and opponents are not noted for whatever reasons. An examination into the showing of the reels in Hull may shed some light on their origin.

Mitchell and Kenyon at the Boulevard

In 1902 Blackburn film makers Sagar Michell and James Kenyon came to Hull to film two rugby matches, several months apart, using the tried and trusted techniques they had employed at other football and rugby grounds in the north of England. They were commissioned by entrepreneurial showmen who used the footage of the crowds and the match action as part of their entertainment package to be shown in a local theatre.

The games filmed in Hull had also been commissioned by Ralph Pringle's North American Animated Photo Company to be shown at the Circus theatre on Anlaby Road. He engaged Mitchell and Kenyon to film Hull v Hull Kingston Rovers (played 26 April 1902) (MK660) . The Hull v Wigan match (M&K149) (played 4th October 1902) was however commissioned by the Edisonograph Company, and both are typical examples of the genre, in structure, format and duration. This simple template served them well in their visits to the games they were commissioned to film: an opening shot of players emerging in single file onto the pitch, somewhat woodenly, usually stage-managed by a member of the Mitchell and Kenyon entourage, often followed by scenes of cheering crowds waving caps and handkerchiefs, and staring directly into the camera through clouds of tobacco smoke ,and seemingly random pieces of action from the games featured.

The matches at the Boulevard started with the teams emerging onto the cycling/running track that surrounded the pitch from the wooden dressing room huts situated out of sight of the camera behind or next to the Best Stand. Footage of the match shot from behind the goal at the Airlie Street end of the ground captures the Threepenny Stand – the popular side – as well as the Best Stand on the other side of the pitch. The layout of the ground (a cycling/athletics track enclosing a rugby/football pitch) meant that a semi- circular expanse of grass behind the goal or try line provided an ideal vantage point. The entry from the dressing rooms, shots of the play from various vantage points behind the goal with the stands and surrounding housing visible in the background all became common features of Mitchell and Kenyon films. It was a vantage point and location that was tried and trusted as far as Mitchell and Kenyon were concerned, with all their Boulevard films using this formula.

Publicity relating to the filming of the game appeared in both the Hull Daily Mail and the Hull Daily News after the match had taken place, and the papers also detailed the other features on the bill, which aimed to appeal to a range of tastes . As a boost or additional item of interest to potential theatre-goers, it had been pre arranged that Hull City personnel would be present at one screening. This was also mentioned before and after the evening in question. 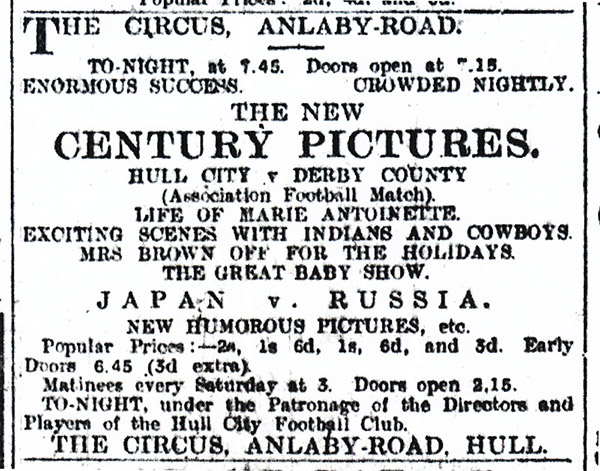 The film had been commissioned by Sydney Carter and his New Century company. Carter was a Bradfordian whose father was manager and lessee of the St. George’s Hall there. Carter was involved in showing bills of films in many towns across the north. Referring to Sydney Carter’s season at the venue in question, one paper reported its roster of films thus:- 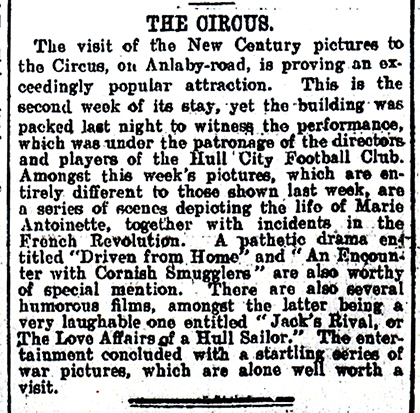 “This is the second week of the stay, yet the building was packed last night to witness the performance which was under the patronage of the directors and players of the Hull City Football Club . Amongst this week's pictures, which are entirely different to those shown last week, are a series of scenes depicting the life of Marie Antoinette, together with incidents in the French Revolution. A pathetic drama entitled “Driven from Home” and “An Encounter with Cornish Smugglers” are also worthy of special mention. There are also several humorous films, amongst the latter being a very laughable one entitled “Jack's Rival, or The Love Affairs of a Hull Sailor.” The entertainment concluded with a startling series of war pictures, which are alone well worth a visit.”

In the Hull Daily Mail on Wednesday 19th, the staging was described as follows:- 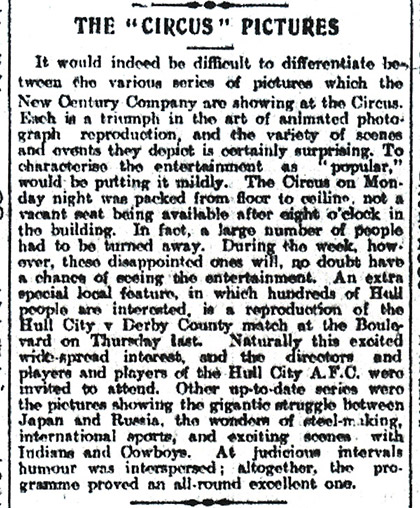 “... The Circus on Monday was packed from floor to ceiling, not a vacant seat being available after eight o'clock on the building. In fact, a large number of people had to be turned away. During the week, however these disappointed ones will, no doubt have a chance of seeing the entertainment . An extra special local feature , in which hundreds of Hull people are interested, is a reproduction of the Hull City v Derby County ,match at the Boulevard on Thursday last. Naturally this excited wide-spread interest, and the directors and players of the Hull City A.F.C. were invited to attend.”

‘A thrilling win for City’

The game itself finished in a 3-2 win for the ‘Cits’ (the nickname Tigers not yet having been bestowed upon the club), and was considered to have been the best yet for the new Association team, being one of 28 games at the Boulevard that season. An attendance of 6,500 fans (the best so far for the new club) were there to witness the entertainment.

The Hull City v Derby County game was a friendly match organised, like all other games that season, with the objective of raising funds to finance the newly-formed City club and its group of professional players. The home fixture was the third one in six days, as the directors sought to exploit the crowds attending the week-long Hull Fair nearby and the thousands of Hull workers who only worked the half-day every Thursday. (Mitchell and Kenyon had filmed the crowds at Hull Fair two years earlier (MK652).

The more games the better, and ideally against illustrious opponents who would attract the crowds (even if these visiting clubs asked for financial recompense for coming to play in Hull). Not that these aims concerned Sydney Carter or Mitchell and Kenyon: their scope was, as usual, to capture the crowds at a local event of interest. The appearance of the famous Derby and England international player Steve Bloomer had been publicised in the days prior to the game in the local Press, but the film appears to have no interest in his presence (did Mitchell and Kenyon have any knowledge of or interest in football?), and the spectacular goal scored by the International has not been captured for posterity. The Derby team's entrance onto the pitch is either missed or omitted by Mitchell and Kenyon. The City team are captured- probably emerging for the second half rather than for the start of the game. Identifiable players are Spence, Rushton, Raisbeck, Martin, goal keeper Whitehouse, Jones and Wilkinson. 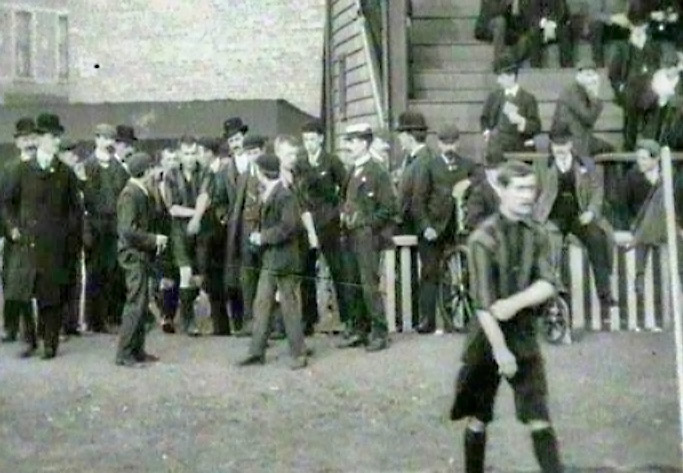 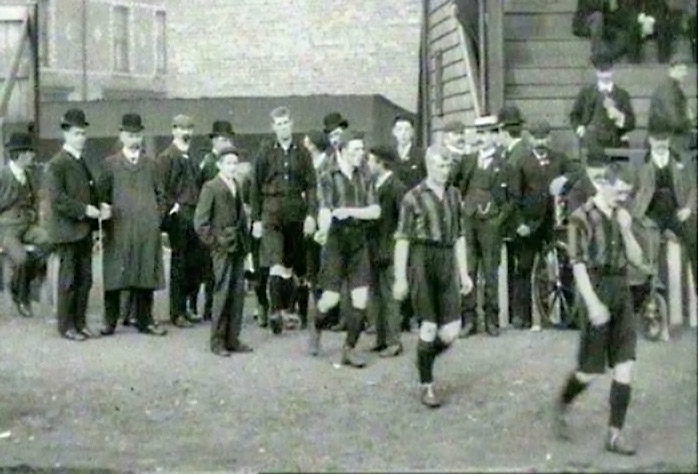 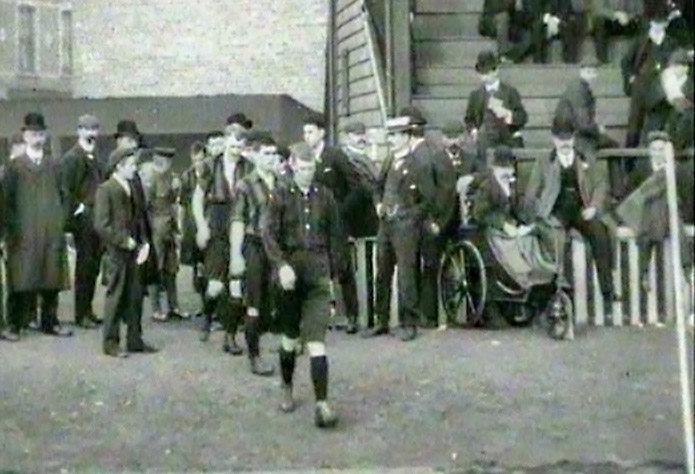 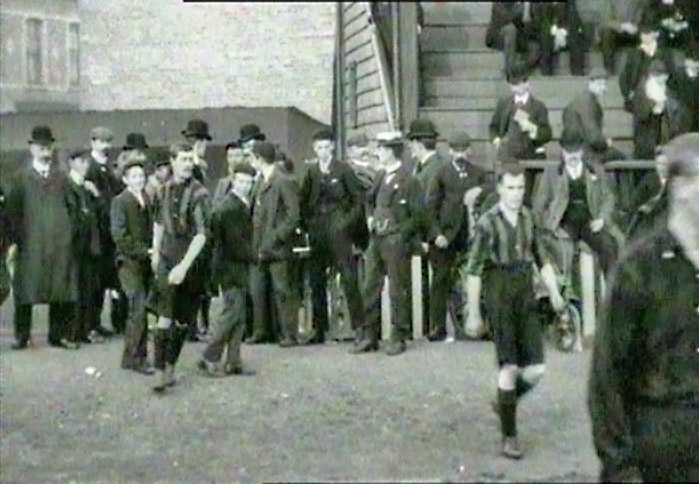 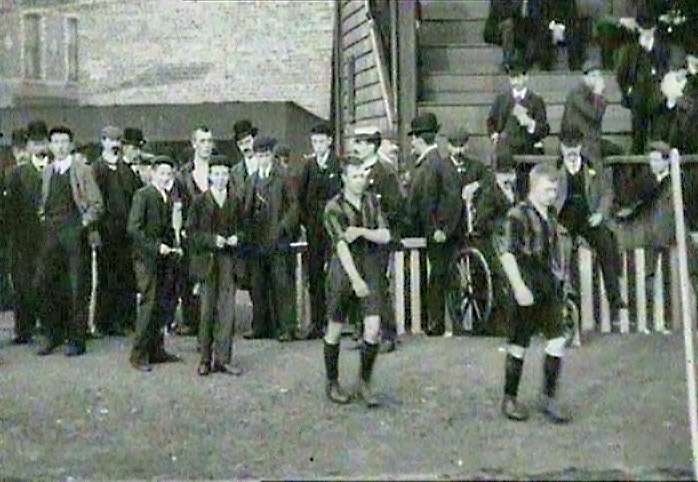 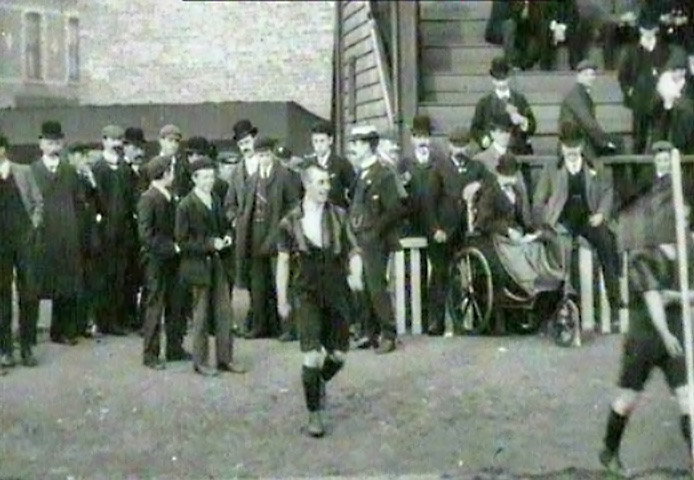 We see the usual scenes of waving and staring at the camera feature, the Best Stand being shown with a wooden fence along its front. Further along the stand a central seated section appears to show a Directors Box, and positioned to the right of the covered stand there is a small Press Box at the top of the terrace steps behind which the rears of the houses down Carrington Street are visible. Other crowd shots show the spectators at the Airlie Street end of the ground.

The film has two component reels, MK115 consisting of crowd shots, and MK113, which starts with the match in progress and the action is filmed with a static camera pointed at 5 or 6 different places on the pitch and capturing the length of the Best stand as the backdrop. As well as the tussles for possession, there is a close up of the Derby Hill’s Ivanhoe triallist goalkeeper John Sketchley in his cap and looking directly into the camera of Mitchell and Kenyon, and further shots of him in action including punching the ball out and bundling over a City forward. This image of the Derby County goalkeeper Sketchley in his striped shirt and cap, looking not at the play in front of him, but at the camera has become the image associated with the two reels. The film actually ends with the City team coming out onto the pitch, not marshalled by a Mitchell and Kenyon man in the direction of the camera to better capture the moment, as had often been the case in other Mitchell and Kenyon films. Also unusual was the fact that only one team is filmed entering the pitch. Was this intentional, or was there some other reason or mishap which precluded this? The slightly weary and dishevelled appearance of the City players tends to suggest that this is the beginning of the second period, rather than the start of the game.

Modern viewers are used to watching football in a standard chronological format, with the main camera positioned in an elevated position on the halfway line and able to track all over the pitch. Mitchell and Kenyon had no such template, nor the sophisticated cameras to be able to accomplish such footage – there was no imperative to adhere to a fixed sequence of game footage, hence ending the film with the entrance of the players would not have seemed as odd as it does to the modern viewer.

The brief given to Mitchell and Kenyon by the showmen who commissioned films from them, was to mix footage of crowds of people (potential viewers when the films were shown locally) with shots of the game in progress ideally capturing 'thrilling moments' to entertain theatre goers who were being presented with a varied bill of short films, music and live artistes.

The pre-announced presence of the players and directors of the club (at the Monday night show after the game the previous Thursday) suggests a well- oiled Sydney Carter publicity machine and that the City contingent were happy to go along and attend. Club director Ernest Morison had a shrewd commercial eye for marketing and publicity, but does not appear to have had any meaningful role in the venture. Perhaps this is not surprising only six weeks after the club's very first game in a season of friendlies, and still attempting to establish its place in the city sporting and cultural landscape. All publicity is good publicity and the 3-2 victory over Steve Bloomer's Derby County in front of City's biggest crowd yet would have provided satisfaction to Morison and the other directors. If anything Morison, given his ownership of the Hull listings guide 'Amusements', may even have in some way, directly or indirectly, facilitated the staging of the event for their mutual benefit.