Hull has always been able to produce good amateur teams, and it was amongst what would, I suppose, be called the ‘toffs’ that Association Football had its real start. Though my last two articles dealt with football of the opening years of the present century another glance at earlier days than those is of interest. Twenty-eight years ago (1888) a club known as Hull Town, who played near the Haworth Arms at Newland, and with whom Alf Spring had his first insight into the game, when he played full back in conjunction with Walter Baker, a sterling defender, came into being. Spring, who admits he knew very little of the game, and played to instructions, had as contemporaries Ansell, Jimmy Nutt, who only a few years back was in the field with Hornsea Brotherhood, and Reg. Wheatley. 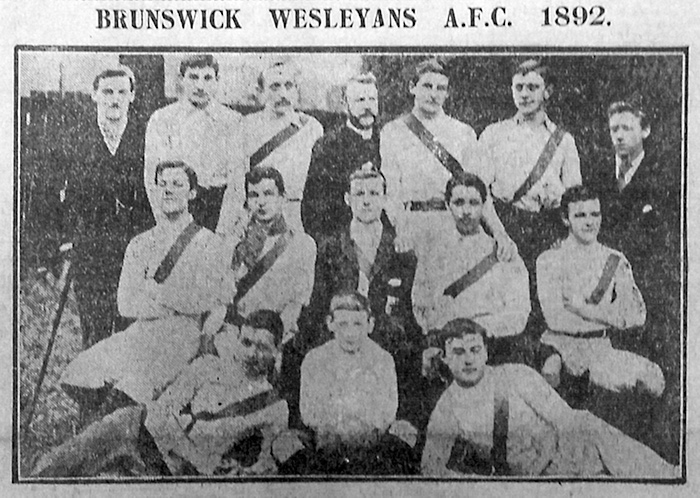 Another individual, known as “Jones” of Bootle, was an old professional and whose history was shrouded in mystery was very prominent in those days. Later in the same year St. Paul’s, who played in Strawberry Lane, near the River Hull at Newland, came into being. Arthur Larard, who was later better known as the Hull F.C. half back, being a prime mover in its foundation and its first captain. Other well-known members of the club, which, as its name implies, was connected with St Paul’s Church, plus a sprinkling of employees of King and Co., were Byford and G.E. Houghton, the latter of whom was hon. Secretary of the Old Cliftonians team of last season. He was a brilliant half-back and a sound cricketer. St Paul’s also possessed two sporting parsons, by a strange coincidence each answering to the name of Wood, but there the similarity ceased, for whereas Wood, the full back, boasted of over six feet, his namesake, the centre forward, only possessed 5ft 1in of stature, but lack of inches did not jeopardise his prowess as a forward, goals galore coming from his feet, whilst resembled an indiarubber ball as much as anything, being down and up again almost as quick as it takes to say

I believe Hull Town and St. Paul’s eventually amalgamated, one of their chief opponents being from the Grammar School then situate in Park-street, E.H. Gillett and Johnny Rushton, now a master at Hymers, being two of their leading lights , whilst matches with Barrow and Barton were of frequent occurrence. It was at Barrow that Alf Spring first acted as referee, but over this performance it is better to draw a veil. At any rate, he did as he was told, not always an easy task, but I am afraid that had the Lincolnshire men known he was a member of the opposing team and had no knowledge of the rules he would not have had such an easy afternoon.

The next club to make an appearance was Kingston Amateurs. Percy Harrison, another “clinking” half back, and T.P. Cooke, son of the then editor of the “Hull News”, being its originators. This club soon became famous. The football was delightful to witness, such capable men as Claud Wright, who turned the scale at 18st, C.N. Jackson , Lawrence Coxhead, a great goalie, and R.W. Wade, of Wade and Son, the timber merchants, being included in the side. Shortly after this, the old boys of Eton House School banded themselves together and formed a club destined to have a long and honourable career, known as Albany, so called because of the school being situate in Albany- street. It was with Albany that Peter, Will, Ted, and Sam Robson graduated, the latter being a particularly clever exponent, eventually playing with Preston North End Reserves and occasionally playing with the first team.

Fred Robson, a younger brother, also wore the Albany colours later in their life. Jack Haller, the ex- Hull City secretary, and Sidney Thrall were also enthusiastic Albany men, whilst Alderman Robson took a deep interest in its doings, seldom being absent from the club’s matches, either at home or away.

It is recorded that on one occasion the four Robson brothers took part in a county trial match, two on each side, the result being a most exciting encounter, quarter neither being asked nor given, and whilst the spectators undoubtedly enjoyed themselves there is no doubt the members of the house of Robson had an even more exciting time.