The following account of the formation of Hull City comes from the handbook for the fund-raising ’Elizabethan Fete’ that took place at Hull City Hall from the 7th to the 10th December 1927. This event was organised to generate revenue for the club through the various stalls and stands in the Hall. The 72 page handbook cost sixpence (2 ½ pence) and featured adverts for the various stallholders and local sympathetic businesses. Photographs of directors, their wives and fete helpers are also featured. The only article in the handbook was written by Harry ‘Veritas’ Comley (a well-known local sports journalist, pictured inset below), and sprawls over 10 or so pages interspersed with adverts and photos. and sprawls over 10 or so pages interspersed with adverts and photos. It is a more or less chronological account of the club since 1904, and features the first annual report which was never issued to shareholders at the time. Other sections include ‘Removal to new ground’, ‘First league match’, ‘Tigers as cup fighters’ and ‘Record scorer’ among others.

It is Comley’s version of the circumstances surrounding the formation of the club that are of most interest. These events took place away from the public eye and are among the most sketchy in the history of the club. As a journalist and original shareholder, Comley would have been close to the club and its directors – close enough to know the minutiae , gossip and unwritten events – and so his account does have a certain authority.

But Comley actually refers to Ernest Morison’s account in his version (the section on the club’s election to the league in 1905) and quotes a few lines directly from it, thus diminishing his own article slightly. Writing in a club publication and using a former director’s account suggests that Comley will not step out of line with the sanitised and accepted versions with the Morison(1913) and Catton (1926) accounts.

(For the sake of brevity and relevance, the full article has been truncated to feature only the earliest events.)

“Forasmuch as there is great noise in the city caused by hustling over great balls, we command and forbid on pain of imprisonment, such game to be played in future.” – Edward II, 1314. 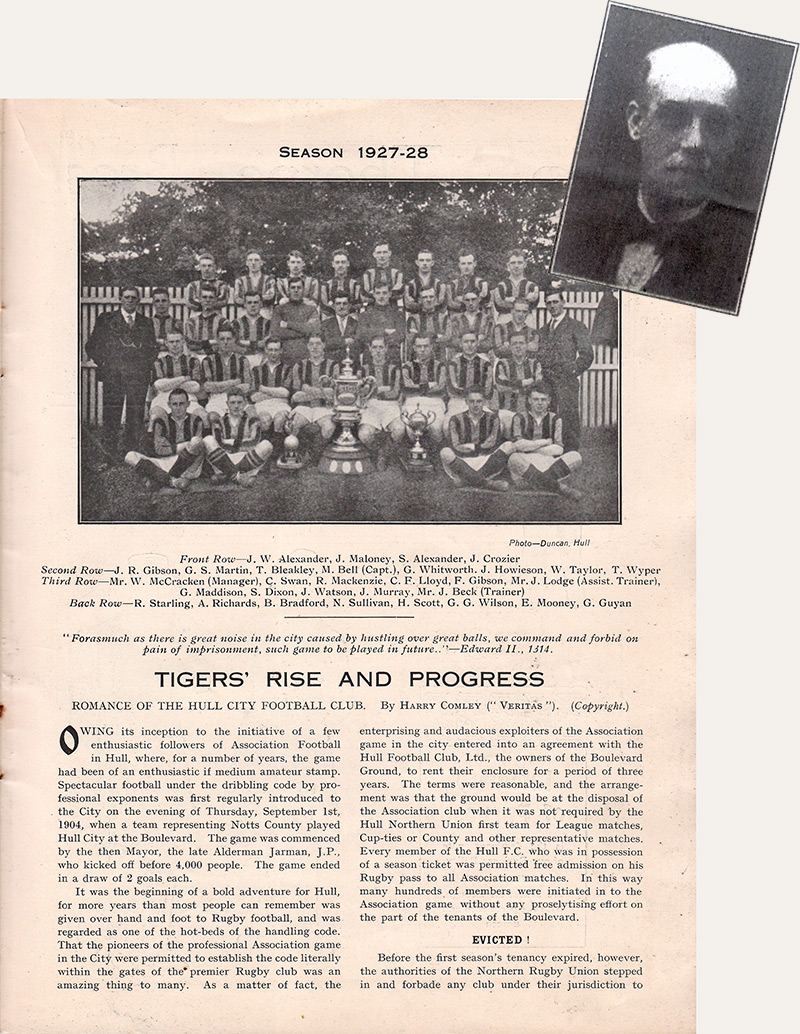 Owing its inception to the initiative of a few enthusiastic followers of Association Football in Hull, where, for a number of years, the game had been of an enthusiastic if medium amateur stamp. Spectacular football under the dribbling code by professional exponents was first regularly introduced to the City on the evening of Thursday, September 1st, 1904, when a team representing Notts County played Hull City at the Boulevard. The game was commenced by the then Mayor, the late Alderman Jarman, J.P., who kicked off before 4,000 people. The game ended in a draw of 2 goals each.

It was the beginning of a bold adventure for Hull, for more years than most people can remember was given over hand and foot to Rugby football, and was regarded as one of the hot-beds of the handling code . That the pioneers of the professional Association game in the City were permitted to establish the code literally within the gates of the premier Rugby club was an amazing thing to many. As a matter of fact, the enterprising and audacious exploiters of the Association game in the city entered into an agreement with the Hull Football Club, Ltd., the owners of the Boulevard Ground, to rent their enclosure for a period of three years. The terms were reasonable, and the arrangement was that the ground would be at the disposal of the Association club when it was not required by the Hull Northern Union first team for League matches, Cup-ties or County and other representative matches . Every member of the of the Hull F.C. who was in possession of a season ticket was permitted free admission on his Rugby pass to all Association matches. In this way many hundreds of members were initiated in to the Association game without any proselytising effort on the part of the tenants of the Boulevard.

Before the first season’s tenancy expired, however, the authorities of the Northern Union stepped in and forbade any club under their jurisdiction to benefit by any Association tenancy, with the result that Hull City took up temporary quarters on the Hull Cricket Club’s enclosure at Anlaby Road, which was kindly placed at their disposal until the ground now occupied by Hull City near the railway was ready for occupation. A few hours’ notice was given to Hull City to quit the Boulevard, which enclosure had been temporarily closed by the Northern Rugby Union because of some disorder at a Northern Union League match, and the Associationists had, perforce, to suffer the inconvenience of finding a temporary ground until the term of suspension had expired.

Financially it was an uphill struggle from the start of the City club, and there were several occasions when the ship seemed likely to become stranded, but with an accession of public interest in the doings of the club, the directors were encouraged to persevere.

THE PIONEERS OF HULL CITY

To go back to the actual beginning of the project to launch the Hull City F.C., it is claimed that the idea first suggested itself to three optimistic young men who, possessed of more enthusiasm and ambition than capital, perhaps, not only met to consider what could be done to set Hull in its proper place among the cities of the land with regard to the Association game, but actually entered into engagements with professional players and visiting clubs, and then, when they realised how far they had gone and how devoid of funds was the exchequer , decided to float a limited liability company.

Singularly enough, and fortunately, as it afterwards turned out, another handful of stalwarts quite unknown to the original promoters of the City F.C., but working quietly towards the same end, contemplated beginning with an application for a team to be admitted to the Midland League. When it was discovered that two bodies were working for the same cause, it was agreed that there should be no clashing of interests, with the result that they became an united body, and a new company came into being with the following directors, who may be said to be pioneers of the Hull City Football Club Ltd. :-

The capital was only fixed at £2,000 in 4,000 ten shilling shares, but there was no great rush for these, and some of the directors had to put their hands into their pockets to keep the ball rolling. It was a hard fight for public favour, but these bold pioneers resolutely faced the position and completed a programme of no fewer than 45 matches, including an English Cup-tie, which was re-played owing to a draw on the first occasion. Twenty six matches were won, 11 lost and 8 drawn. Hull City scored 116 goals against 70. Among the opposing clubs were Notts County, Everton (Combination team), Leicester Fosse, Middlesbrough, Derby County, Bradford City, Grimsby Town, Preston North End. Liverpool, Manchester City, Sheffield United and Barnsley.

For some unexplained reason no annual report and balance sheet was issued to shareholders, but one was prepared, and I believe, this is the first time it has appeared in print:-

In presenting the first annual report and balance sheet of the Company, the directors would congratulate the shareholders on the success of Association football in Hull. Notwithstanding the opposition and the many difficulties which have strewn the path of the City club and the fact that “class” Association was an unknown quantity in Hull until their advent, it is remarkable that to-day (the report was obviously prepared after the club had been admitted to Division II in the following season) average crowds of 6,000 and 7,000 people assemble at League (Second Division) matches played by your club.

That the Board decided to re-sign nine of the past season’s players proves that the money expended in wages had its beneficial side, viz., providing the nucleus of a team.

The loss on the first season’s working account amounts to £1,857 2s. 8d., but the figure includes £852, a proportion of Summer wages, transfer fees and bonus of of the present team, thus reducing the said loss to £1,005 2s. 8d. Of this amount, £663 2s. 11d. was paid to visiting clubs as guarantees. This expenditure must be taken as for educational purposes

and further, it is the opinion of your directors present in London at the meeting of the Football League when the club was admitted to membership of the August body, that had we not taken such measures to impress the leading clubs, our inclusion would never have taken place.

Further, the sum of £1,350 4s. 8d. was taken in gate receipts and guarantees. Considering that all the matches played were of the “friendly” (ordinary) type, and that the sporting proclivities of the present day spectator demands matches of a competitive nature, it is highly gratifying that such a total sum should have been reached.

Your directors have taken a five years’ lease of the ground to the East of the present pitch at the Cricket Ground, and feel sure when the same is fully completed they will accommodate fully 20,000 spectators.

It should be explained that a number of new directors were admitted to the board, and that the original Secretary Mr. B. Crompton, was succeeded by Mr. J.F. Haller, who was the originator of the Midland League suggestion previously referred to. Mr. Haller has often been described as the perfect secretary, and the club was the poorer when later he decided to relinquish the office. When other directors were elected, the board was reconstructed, Mr. Alwyn D. Smith, a keen supporter of the game, and an old Cambridge University player , and still prominently connected with banking affairs in the City, was elected chairman in succession to the late Mr. William Gilyott, who remained on the board after having seen the club through most troublesome waters. Other stalwarts in the early struggle were Mr. James Barraclough and Mr. J.H. Bielby, the present president and vice-president of the club respectively.