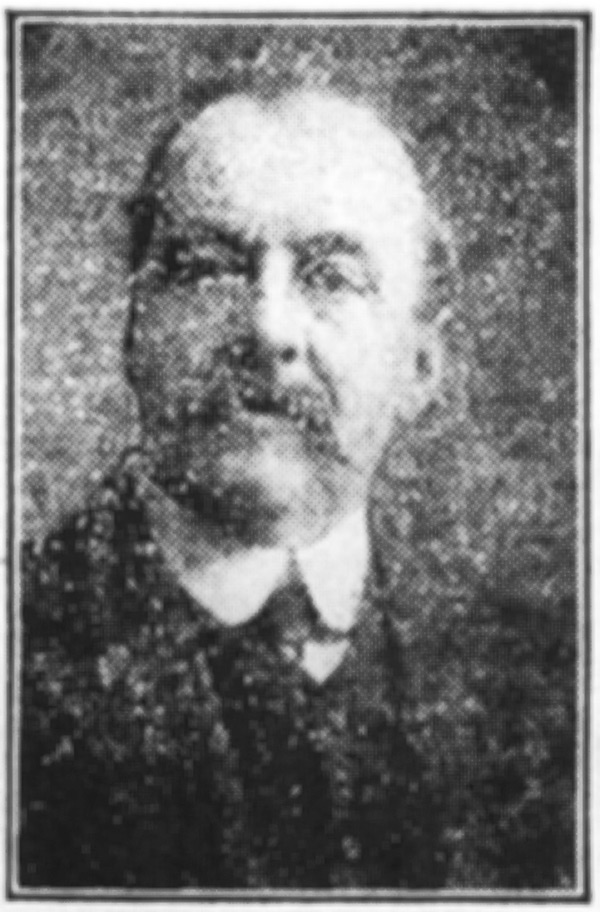 Definitely an associate of the nucleus of young players from the Beverley Road/ Newland Avenue area who pushed to start a ‘class football team’ in the city, William Hay was 54 years old when Hull City was founded.

The surname Hay had been associated with those of the Frosts, Levitt, Andrews and Crompton for several years prior to 1904, as the brothers Wiliie and Henry played in many of the same teams. Their father William actively supported his sons in their footballing endeavours, and it seems likely that his role as a founder of the club 1904 was as a sort of ‘family representative’ on their behalf, alongside their young friends and team mates.

Born in 1850, he was well into middle age at this stage and was working for one of Hull’s daily newspapers, the Eastern Morning News, in their advertising department. He had joined the Hull News as a youth and was associated with the two newspapers for more than 60 years. No doubt he acquired a wide network of contacts and friends among the Hull business community and newspaper trade in which he worked.

(One other City founder, Ernest Morison, would almost certainly have been an acquaintance, perhaps even a friend. Morison’s Advertising Agency were involved in the design and ideas of the adverts which appeared among the pages of the EMN. It may well be that Morison was drawn into the Hull City endeavour by Hay, given that he (Morison) had no documented history of involvement with the game.)

The Hay family lived on Chestnut Avenue a narrow street off Queen’s Road, which connects Newland Avenue to Beverley Road, and then they had a house on Grafton Street, which also links the two main roads. Mark Andrews, Fred Levitt and Ben Crompton all lived a few minutes’ walk away, the former on Newland Avenue and the latter pair on Beverley Road

His two sons Wiliam (junior) and Henry were keen and capable players, who had turned out for various local clubs in the late nineteenth and early twentieth centuries. They were recorded as playing for the Hull Grammar school in 1894 (along with the Frost brothers (Ben Saunders and Ernest)) . The Grammar School at the time was in Leicester Street, off Wellington Lane on the Beverley Road. Subsequently, the ‘brothers Hay’ (as they were often known in the sports pages of the local press), played for Hull Brunswick in 1896/97, Harlequins in 1898/99, then for Comet in 1899/90 alongside Fred Levitt and Ben Crompton. The brothers continued their association with Levitt and Crompton, when they turned out for Hull AFC in the 1901/2 season. This team played their home games at Bull Lane. Ben Crompton dropped out of playing duties and a new name, Mark Andrews, appeared on the team sheet.

William Hay senior was therefore someone who had ties/contact with Crompton, Levitt and Andrews through his sons’ footballing activities.

Hay does not feature prominently in the documented activities of the directors of the new club and quickly slips out of view amidst the early boardroom changes, a casualty of the associated manoeuvring and positioning, and the increasing assertiveness of the wealthier and better-connected part of the directorate. The earliest identity of the club was rapidly changed, as more illustrious and notable names joined the club’s board of directors.

The exact date and nature of his exit was not publicly documented, but it seems probable that he was a casualty of the turbulent first season when City moved from the Boulevard and sought to solidify their boardroom ties with their new wealthy landlords. Like his sons, William Hay found himself eased out of the club that he had helped found. The satisfaction at the rapid and relentless rise of their club was no doubt mitigated by their regret that they had so quickly become expendable.

After his death in 1926 aged 76, it was noted that ‘Mr Hay took a keen interest in football and was an ardent supporter of Hull City’. At his funeral, an impressive number of mourners from Hull’s newspaper trade paid their respects, as did a large representation of the Humber Lodge of Freemasons, of which he had been a member. Tributes were paid to his loyalty, geniality and courtesy, and it was said that he as highly respected, as he was widely known. Hull City were represented by Jack Bielby and by the then chairman’s wife, Mrs. James Spring.